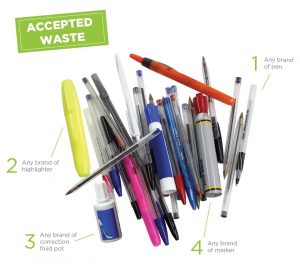 All writing instruments (except for wooden pencils and chalk) are accepted : Any brand of pen, felt tip, highlighter, marker, correction fluid pot, correction tape, mechanical pencil and eraser pen regardless of their composition.

Note that we do not accept glue sticks, erasers or rulers